A ruined stronghold located in Askeaton in County Limerick

In the very heart of this County Limerick town stand the impressive remains of a medieval fortress. Askeaton Castle dates from 1199, when William de Burgo built it on a rock in the River Deel.

Over the centuries, the castle proved itself key to the history of Munster. It was the power base of the earls of Desmond after 1348. In 1579 it held out against the English general Sir Nicholas Malby, an incident that helped spark the second Desmond Rebellion.

The banqueting hall is one of the finest medieval secular buildings in Ireland. The tower is partly ruined, but some fine windows and an exquisite medieval fireplace have remained.

The early eighteenth-century building nearby was used as a Hellfire Club. These clubs were rumoured to be dens of excess in which wealthy gentlemen indulged in drink, mock ritual and other nefarious activities.

Located in the town of Askeaton.


Please Note: Picture is courtesy of photographic unit of the department of environment, heritage and local government.

See all the visitor attractions in County Limerick

Sorry there is currently no listings for Askeaton.

Would your business benefit by being listed here. If yes then click for more details 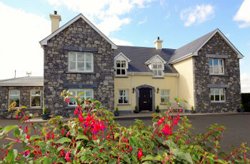