Glenbeigh Village is located in the South-West of Ireland in County Kerry. Situated on the Iveragh Peninsula on the N70 Ring of Kerry road. Glenbeigh nestles beneath the Seefin mountain at the entrance of a horseshoe of mountains where the Behy river mingles with the waters of Dingle Bay.

Many Fiana legends centre around Glenbeigh where Diarmuid and Grainne spent some days hiding in a cave in the valley of the Behy, where Diarmuid achieved such exploits against his pursuers. Rossbeigh is known for where Oisin and Niamh took to the sea on their white horse to live in the land of youth - Tir na nOg.

Near the village is the ruin of "Wynne's Folly", a castle mansion built by Lord Headley Wynne in 1867. The terrible tragedies which befell the population of the Wynn Estate in the parish of Glenbeigh, in the 1880's is still talked about in the Glenbeigh area. The barbarity and brutality of Mr Roe, the agent for Lord Wynne, during the evictions were said to be far in excess of the worst actions of his master. Even Gladstones Land Act of 1881 which in effect said that tenants should no longer be removed at will, did little for the residents of the Wynn Estate, as during the years of 1882 and 1883 there were numerous evictions because the tenants were just not able to afford the increased rent, by a massive 50% in most cases, to pay for the construction of the castle. Not very long after this the affairs of Wynn drifted into insolvency and he made his exit from the Glenbeigh scene.While World War I was in progress the Castle and grounds were let to the British Military Command and used as a training centre for reservists. In 1921 Republican forces burned the castle to the ground and it was never rebuilt.

One of Kerry's finest walks follows the Glenbeigh Horseshoe, circuit of hills from Seefin to Drung Hill, with a never ending succession of panoramic close-ups of glacial corries, lakes and magnificent scenery.

Rossbeigh Strand located nearby is a beautiful stretch of sandy beach known for safe swimming and water sports lies under the shadow of Curra Hill. A tower built more than a century ago stands at the north end of the sandhills. This was a guide mark for ships entering Castlemaine Harbour.

Caragh Lake is a beautiful expanse of water 4 miles long set among broom and heather with majestic mountains for background at the eastern end of village is well known to anglers for excellent fishing.

Coomasharn Lake, the largest of the lakes in Glenbeigh, is enclosed on three sides by high rocky mountains protecting it from modern poluters is known for its trout fishing and is one of the lakes in Ireland which has the Sliver Blue Char, an eel water fish.

Glenbeigh is a very popular holiday base for touring the Ring of Kerry. Fine restaurants, pubs, petrol station and fantastic scenery are all to be found in the locality.

Forest View is an elegant family run bed and breakfast located close to Glenbeigh village with panoramic views of forest. This beautiful, tranquil home is ideally located along the Ring of Kerry making it an ideal base for touring.

Would your business benefit by being listed here. If yes then click for more details 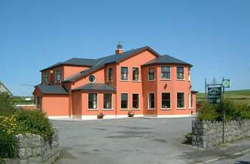 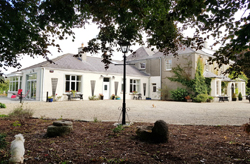